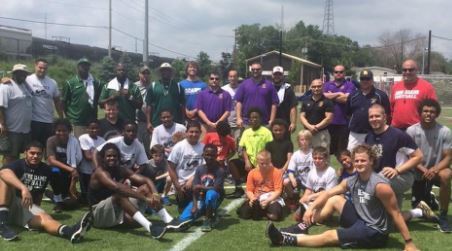 A group of Notre Dame Football players had the tables turned as they traded their spikes for clipboards on Saturday at the Kroc Center in downtown South Bend. Wide Receiver Chris Brown led the charge as he and teammates Corey Robinson, Tyler Newsome, Tyler Luatua and Scott Daly, along with Mark Hiestand were on hand to offer instruction and motivation to the youth of South Bend. Playing football is a rather demanding physical task that can only be matched by the challenge of teaching the game! Now they know how their coaches feel! “It was great fun working with the kids, they were awesome. Hopefully, we were able to have some positive influence on the lives of some kids in the area,” said Corey Robinson.

In March, the Irish visited the Lydick Early Childhood Center to celebrate “Read A Book Month.” Robby Toma, Chris Watt, Braxston Cave, John Goodman and Mike Golic shared the gift of reading with the children in each classroom at the Lydick Center. Photo Gallery of this event from ND Football’s Facebook page

Senior linebacker Manti Te’o spoke to nearly 300 people in attendance at the mayor’s luncheon in Mishawaka this April. Te’o, an Eagle Scout, was the featured speaker at the event honoring local boy scouts for their hard work. ABC 57 Article on this event

The entire Fighting Irish football team has participated in Notre Dame’s Relay For Life in each of the past two springs. In 2012, the Irish players spent time with children, cancer patients and survivors, took part in the Luminaria ceremony and raised money to support the American Cancer Society.

Chicago Jesuit Academy students took a field trip to Notre Dame’s campus in early May. As part of their visit, the students spent time with Matthias Farley, Louis Nix and Christian Lombard, taking a tour of the team’s facilities at the Guglielmino Athletics Complex and Notre Dame Stadium.

Mike Golic and Braxston Cave began their Senior Week at the Healthwin Nursing Home where they took residents out for a walk as part of a summer kickoff event at the home. The Irish will return to Healthwin later this summer where they will spend more time with the elderly and disabled residents.

Give Kids the World

In the lead up to the 2012 Champs Sports Bowl, Notre Dame Football players spent the morning with some very special children at Kissimmee Florida’s Give Kids the World, a non-profit resort for children with life-threatening illnesses and their families.